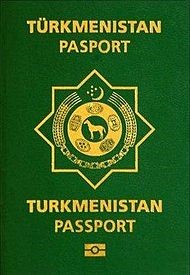 4. Citizens of Turkmenistan for passport reception should apply in bodies of the State migration service of Turkmenistan. For renewal of the passport, an application can be made 6 (six) months before the expiry date.

5. Reception of the personal application of a citizen in a written or electronic variant for passport issue is made according to legislation of Turkmenistan. Day of a documents acceptance from a citizen for passport issue is the day of acceptance of its electronic and biometric data. To minor persons and the persons recognized as incapacitated, passports are issued upon approval in a written or electronic variant of one of parents or other lawful representative. At reception of written approval and issue of passports to minor persons and persons recognized as incapacitated, their presence is mandatory.

According to the legislation of Turkmenistan children under 16 years, veterans, and disabled people of any category are excepted from payment of a State Tax or consular fees.

6. The passport is issued for a period up to five years.  The passport is handed over personally to the owner or its lawful representative on official receipt upon presentation of the documents proving its identity.

7. If departure from Turkmenistan is related with urgent treatment of the leaving citizen or with heavy disease or death of close relative living outside of Turkmenistan, or with other urgent circumstances, the application for passport registration is considered within three work days.

8. The passport exchange is made in following cases:

Note:If necessary, the passport may be replaced before the end of its term of validity.

9. The passport is cancelled in following cases:

At replacement of the passport after a puncture of its pages and stamp putting down «Ýatyryldy/Cancelled» on the first page the passport is returned to the holder.