THE INTERNATIONAL CONFERENCE “TURKMENISTAN AND THE UNITED NATIONS: COOPERATION FOR PEACE AND TRUST” WAS HELD IN ASHKHABAD

On March 2, 2021, the International Conference “Turkmenistan and the United Nations: Cooperation for Peace and Trust” on the occasion of the 29th anniversary of Turkmenistan’s UN membership, was held in the Ministry of Foreign Affairs of Turkmenistan.

In his speech the Minister of Foreign Affairs of Turkmenistan Rashid Meredov noted that, 29 years ago, on the 2nd of March, 1992, United Nations General Assembly adopted historical Resolution, according to which Turkmenistan became a full-fledged member of the League of Nations. During this period Turkmenistan actively implementing the “policy of open doors”, dynamically develops cooperation with this largest international organization and its specialized agencies for the sake of peace, security and sustainable growth.

The main vectors of interaction between Turkmenistan and the United Nations have strategic character. So, on December 12, 1995, Turkmenistan gained permanent Neutrality, already twice enshrined in relevant Resolutions of the United Nations General Assembly. Based on its neutral status, Turkmenistan has repeatedly come up with initiatives, aimed at ensuring global peace, security and stable growth.

In this context especially significant is the fact that Ashkhabad became the headquarters of the Regional Centre for Preventive Diplomacy for Central Asia. The Government of Turkmenistan intends to expand the presence of the UN system in the country. In February of the current year an agreement was reached to open in Ashkhabad the representative office of the United Nations Office for Project Services (UNOPS). It is also important to mention that beginning from February 2021 program officer of the UN High Commission for Human Rights started his work in Turkmenistan.

Currently the interaction of Turkmenistan on the UN platform covers various spheres of life of the country. It is due to membership of Turkmenistan in 11 councils, commissions and committees of the UN. The country promotes its candidacies to other structures of the Organization. 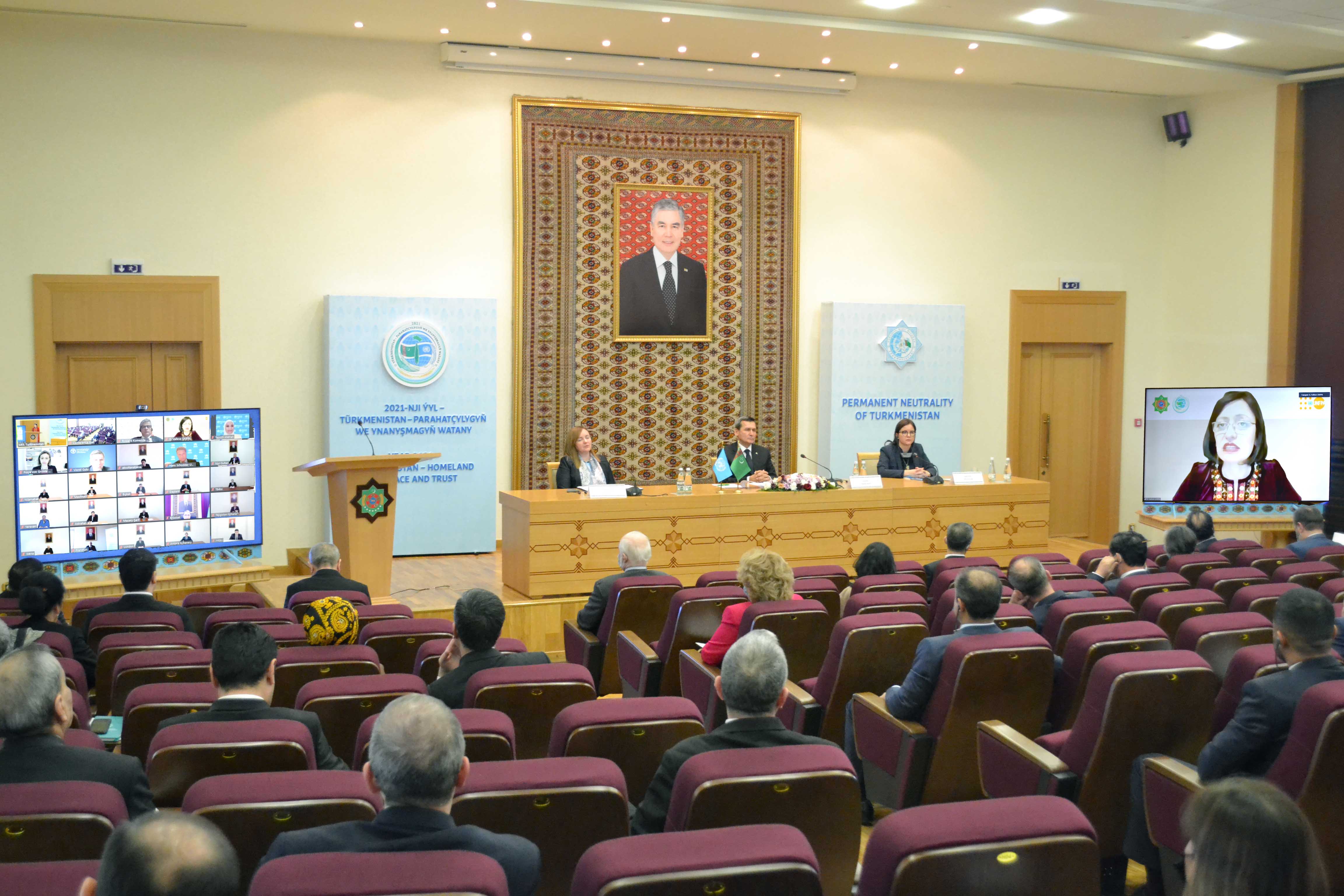 With the aim of all-round realization of the Framework Program of cooperation in the sphere of sustainable development between the Government of Turkmenistan the United Nations for the period of 2021-2025, which was adopted on March 14, 2020, Turkmenistan activates effective partnership with the UN Development Program, UN Population Fund (UNFPA), UNESCO, UNICEF, UNHCR, WHO and other structures of the UN system.

The Minister of Foreign Affairs of Turkmenistan also expressed special gratitude to the representation offices of the UN specialized agencies in Ashkhabad for their vast contribution into the development of cooperation between Turkmenistan and the whole UN system, including work out and participation in implementation of national plans and programs.

During the speeches the speakers noted commitment of Turkmenistan to the development of international cooperation in the name of peace, stability and sustainable development. Also the efforts of the Leadership of the country for the strengthening of the culture of peace, trust and mutual understanding in the relations among countries and peoples of the world had been stressed.

At the end of the Conference the Address on behalf of the participants of the International Conference “Turkmenistan and the United Nations: Cooperation for Peace and Trust” to the esteemed President of Turkmenistan Gurbanguly Berdimuhamedov had been adopted.

A TURKMEN-AFGHAN MEETING WAS HELD ON THE TAPI GAS PIPELINE CONSTRUCTIO...

MEETING OF THE REPRESENTATIVES OF THE CHAMBERS OF COMMERCE AND INDUSTR...

MEETING OF THE DEPUTY FOREIGN MINISTERS OF THE COUNTRIES OF CENTRAL AS...

A NUMBER OF SIGNIFICANT ISSUES WERE DISCUSSED AT THE TURKMEN-JAPANESE...